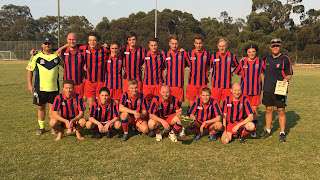 Mooroolbark Knights survived the heat and survived the pressure of penalty kicks to secure their second KonQa Football Chaos Cup trophy in three years. Whitehorse United and Mt Eliza both narrowly missed out of the final and played out a 3rd placed shoot that was won by Whitehorse.

With fires closing the freeway from Melbourne in the morning, it highlighted how hot the weather became so it is a credit to all the teams and players that took to the pitches over the day.


Congratulations once again to Mooroolbark and also thanks to Monash as they too again put on a fantastic cup tournament.