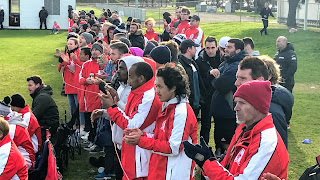 End of the regular season sometimes comes with the mixed emotions of needed a break but at the same time going to be missing it. Now after the amazing scenes last Saturday when Barnstoneworth United became perhaps the first time with a fictional club name from a TV show to win a FV State League I am now looking around to doing cup finals and the like.

This Saturday I will be heading to do two matches from the Victorian Churches FA as Knox Churches host their cup finals. Two times and current Premier League and Chaos Cup winners Mooroolbark Knights will be taking on the might of Berwick Churches in the main cup final.

On Sunday looking at perhaps the MCSA cup final. I have never been to one of that leagues matches so might be as good as any to introduce myself  as Clube takes on Carlton Azzurri. Now only downside rain is predicted for the day.

Well more tom work out in the coming weeks but yeah I also want to be able to enjoy some of the better weather that is coming up.