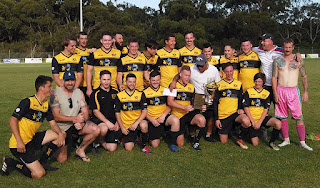 For only the second time Monash Soccer Club won the Monash Views Chaos Cup after surviving two penalty shootouts. The all day tournament had a number of teams that could have taken home the trophy along with Carlton Azzurri whose first showing was very impressive.

Carlton was only knocked out by penalties in the semi final against Monash and at one stage even looked like they had advanced to the final until the ref called an infringement on their keeper after he appeared to have saved a Monash kick.

Finalist West Brunswick Wanderers had a strong showing all day but ran out of legs in the final with them playing their third straight match, amazing effort for a team that is put together only for this tournament. They had to defeat Mt Elisa in the semis, a club that once again provided entertainment on and off the field!

Thanks to all that attended, Monash Views, Monash Soccer Club and all the clubs that participated.