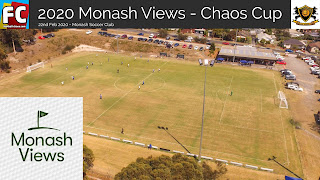 Here are a few quick updates in regards to the 2020 MONASH VIEWS Chaos Cup. First up, a new sponsor has got on board with Monash Views. A quick summary on their facebook page states that Monash Views is a new land development. Set amongst a prestigious golf course with stunning rural, lake and mountain vistas. Welcome Monash Views. Thanks also to past sponsor KonQa who have been great supporters over the years.

The clubs in the list below are the ones so far confirmed and which league they are representing. Plus also great have West Brunswick Wanderers back to the tournament after a year off.
Now they are awaiting one more club confirmation who will be a great addition if they do indeed confirm their participation. Also like to note that sadly Bayswater Strikers Soccer Club will not take part this year. Bayswater has been an integral part of the cups tournaments hosted by Monash over the years and no doubt will be missed.

Tournament is hosted and run by Monash Soccer Club on Feb 22nd at Monash Reserve, Newborough.